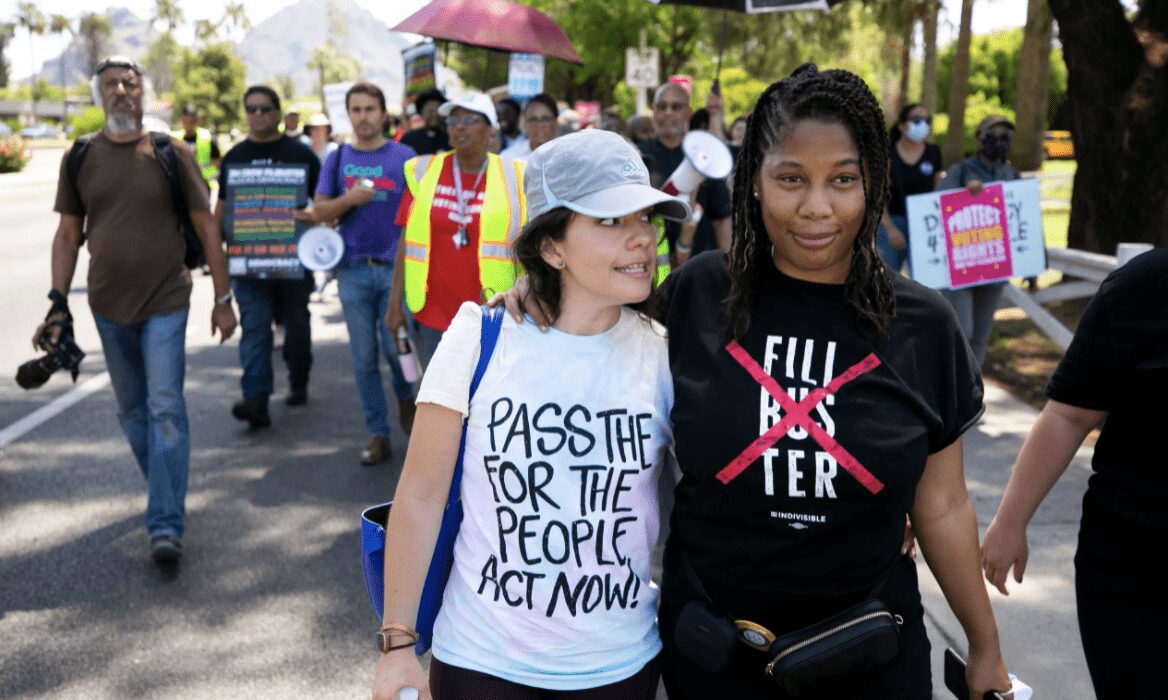 In the spirit of John Lewis and getting into some “Good Trouble” several Phoenix members of Progressive Democrats of America (PDA) were arrested along with Rev. Jesse Jackson, Rev. William Barber, and Barbara Arnwine, July 26th. Led by the Arizona Coalition to End the Filibuster and the African American Christian Clergy Coalition, some 40 “Democracy Protectors” were arrested at Senator Sinema’s office.

“We put our bodies on the line for voting rights and to protect our Democracy. Now we need Senator Sinema to do her job, listen to her constituents who want action on voter protection, immigration reform, labor rights, and so many other issues,” said Isabel O’Neal, one of the arrestees and a local PDA leader.

Support Isabel and our other activists’ ongoing actions with a monthly donation.

Friday, August 6th, will be the anniversary of the passage of the 1965 Voting Rights Act. To mark this important battle in our history for civil rights, and to promote the importance of passing the For The People Act, voting rights activists are back in the streets. On Monday, August 2nd, thousands will gather in Washington, D.C., for a rally and direct action.

Then events will continue through the week as we tell the Senate the #RecessCanWait, and they need to address voting rights now!

From Women civil rights leaders being arrested in Washington, D.C., in early July, to the Phoenix, AZ, march and sit-in at Senator Kyrsten Sinema’s office, to big actions in Austin, TX, this week, there is a growing and urgent movement to protect our Democracy spreading across the country.

It’s all hands on deck, and today I am asking you to support PDA’s ongoing good trouble to bring us the change we need.

If you cannot donate, please volunteer how you can.

Thanks so much for anything you can do!