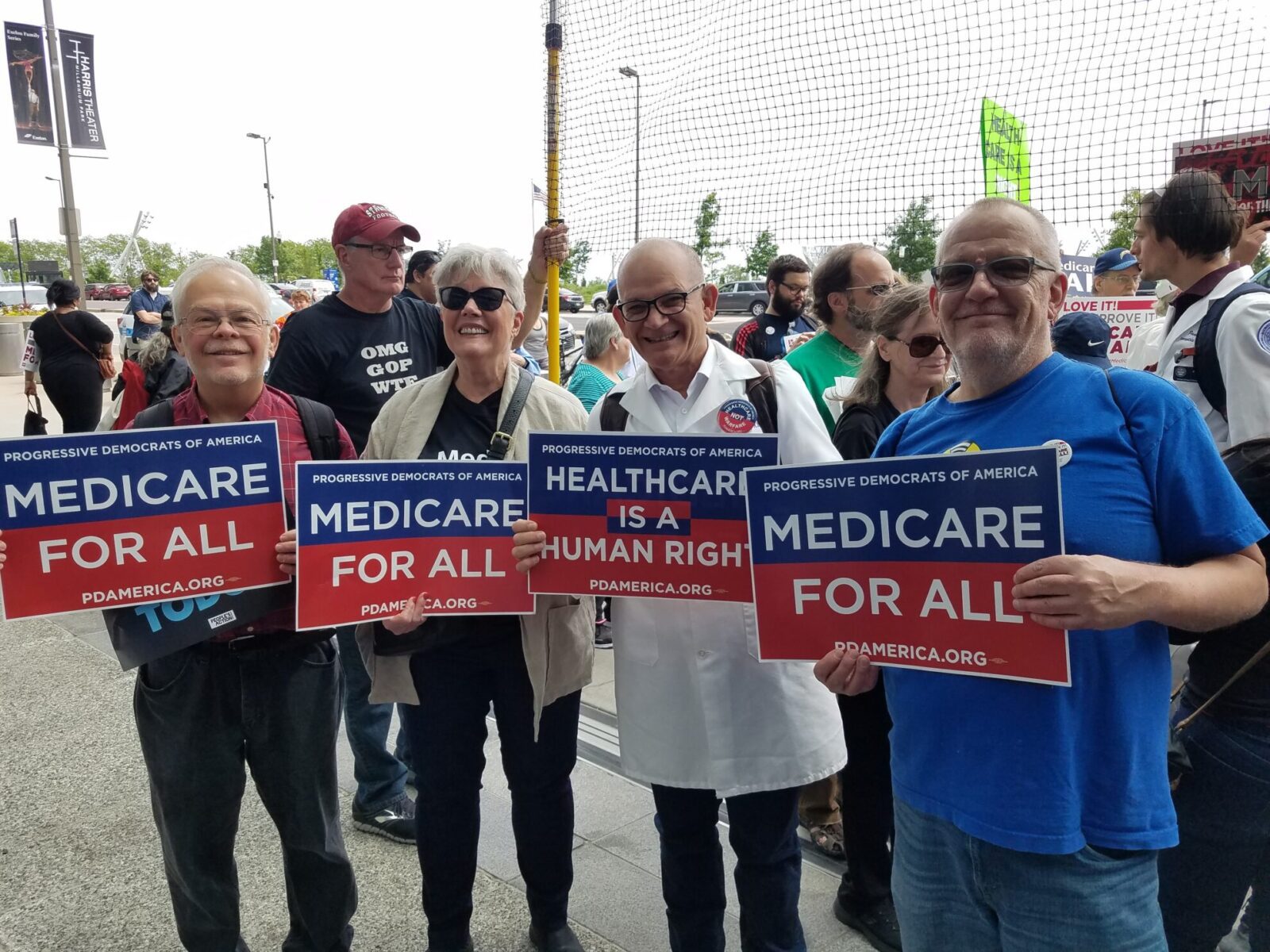 This is now our 129th consecutive weekly PDA Online Town Hall since #COVID19 first hit the U.S. in the spring of 2020.  And today, which happens to follow yesterday’s 57th anniversary of Medicare and Medicaid being signed into law, once again we must report that because of our inadequate, inequitable, and unjust Healthcare, controlled by commercial rather than public interests in this country, the U.S. continues as the world leader in total COVID19 deaths to date.

The Harvard University daily tracking center is reporting the U.S. COVID19 total death toll today at 1,026,478, which means that some 409,398 Americans now that have died in the U.S. from COVID19 would still be alive today if we had a #SinglePayer expanded and improved #MedicareForAll (MFA) system, as we should in this country.

This means that once again about 1,200 more Americans died unnecessarily from COVID just this week.  That’s one thousand two hundred of our mothers, fathers, sisters, brothers, aunts, uncles, grandparents, and children that did not have to die from this disease just this week, if we had MFA.

This week saw the global vaccination rate continue to rise slowly, now at an estimated 69.19% of world population, while the U.S. remained behind the world average at only 67.76% fully vaccinated here in this country.  That puts us ranked again this week at No. 64 in the world – just behind Rwanda and Sri Lanka, and once again just ahead of India and Belarus.

And Wyoming, home of Republican establishment firebrand, Rep. Liz Cheney, continues as the U.S. state with the lowest vaccination rate, again this week at only 51.6%.  How about that, Rep. Cheney?

Despite still climbing numbers of hospitalization and deaths especially among the unvaccinated, and especially now due to the increased virulence but low rate of serious illness more generally of Omicron subvariant, BA.5, the U.S. and other countries have generally stepped down public health measures.  For example, in Japan, health experts have invoked the idea of flexibility in their responses to the ever-changing viral properties, as a way of “living with COVID19”.

Meanwhile, this week’s latest most notable cases of those stricken, include U.S. Senator from West Virginia Joe Manchin, and of course President Joe Biden, himself, with symptoms reportedly not severe enough to require hospitalization, unlike former President Trump’s case early on in the pandemic, where Trump’s condition, pre-vaccination, was described as precarious day-to-day, and now Biden is reporting a good initial response to Paxlovid, although there was news just yesterday that he is believed now to have a post-treatment case of “rebound” infection, going once again back into isolation but remaining without serious symptoms.

The Monkeypox virus, known as MPXV, itself related to Small Pox in the variola class of contagious microbes, has now spread in the U.S. and elsewhere, and is itself mutating enough to have government officials considering declaring emergency status.  With recognized shortcomings in our ability to respond to this new menace similar to our ongoing inadequate and unethical responses to COVID19 and HIV before that, including in particular Monkeypox vaccine availability inadequate to meet the public need, public critics such as Scott Gottlieb of the NYT pointed out just yesterday, “We don’t have a federal infrastructure capable of dealing with these emergencies.”

And while some areas in the U.S. and around the world are once again showing some slowing of increased cases of COVID19 and the BA.5 Omicron variant in particular, and new vaccines more capable of suppressing these variants are eagerly awaited by a majority of us, likely to be release in September, hospitals and other provider services continue to be reported as strained beyond the breaking point in many places.  As Politico noted earlier this week, provider “burnout” due to the “waves of infection” that have hit again and again, are taking their toll.

How this all can mean anything but confirmation that once again what’s emergently needed is Universal Healthcare where ALL the people get ALL of the care, under an expanded and improved MFA system, remains a political conundrum.  It is clearly past time to take action.

So, thanks again for listening and for all you’re doing.